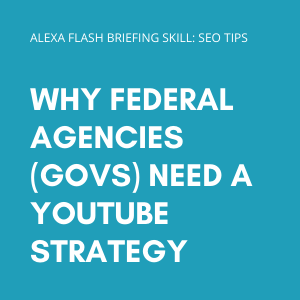 Hello, and thanks for listening to SEO tips today.

Let’s start with some background.

The US government began engaging with YouTube and launching channels on YouTube in 2009 when it signed Special Service Agreements (SSA) with some of the big social networks to ensure compliance with federal terms and conditions. YouTube is a free platform for hosting and managing videos, and in many cases, it can replace in-house video embedding platforms. Still, not all agencies are using YouTube as their primary video management tool.

In 2020, 95% of the videos presented in Google’s default search are YouTube videos (82% overall across all tabs: All, Images, Video, News, Shopping, and More). I have seen high authority sites rank well with videos in search and they were *not* using YouTube, but this should be evaluated on a per-agency basis. And if you are using an alternative to YouTube, due to the site’s popularity as a discovery engine, I recommend that federal agencies ALSO have a vibrant YouTube channel.

It’s important to keep in mind that the intent behind users looking for videos on Google differs from searchers on YouTube. Grossly generalized, Google searchers are looking for an answer to their question (facts, how to, etc.), where YouTube users are looking for entertainment (e.g. seeing the National Zoo’s newest panda cub).

There are a variety of factors involved with ranking well on YouTube, but the biggest components are having a channel with a high number of subscribers and authority, having video with high views and (how many people clicking on the video), high engagement, and lengthy % of watch time and time spent on YouTube after watching your video.

Using YouTube as a platform for embedding videos increases your video popularity and visibility. For instance, if a user watches a video embedded on a webpage, that view time will add to the overall watch time metric. Or, users can embed a playlist of several videos on a .gov website, which increases the overall session time where that user is engaging with YouTube content and could ultimately help improve ranking. It’s also important to know that paid promotion on YouTube counts toward that overall watch time number.

Agencies that want to increase their video visibility need a strategy for growing channel subscribers. Putting all efforts into YouTube marketing supports that strategy. YouTube channels don’t really “breakthrough” and perform until they reach over 10K subscribers (where additional features open up like super chat and YouTube stories), so if an agency is going to put effort into YouTube, it makes more sense to coordinate all efforts to encourage subscribing to their YouTube channel to drive up that subscriber number and because new subscribers are notified of new videos from channels that they follow.

Since 2009, multiple agencies have used YouTube as their primary video hosting channel, including:

There are a few special treatments that government channels are afforded due to the SSA with YouTube. One example is a white-labeled embedded video player that does not have the YouTube logo. In addition to these conditions, channels can opt out of advertisements played on their videos, and can also opt out of the “Up Next” Youtube feature which automatically plays another video.

Finally, all government videos need to be accessible and can be using standard YouTube features. Many of these requirements will also help with optimizing them for search discovery.  Digital.gov has a list of accessibility requirements.

YouTube videos are not effectively found without creating a strategy for promotion that includes paid advertising. Additionally, when channels use TrueView ads (a video that plays prior to other videos), they see views of previously uploaded videos on their channel increase by up to 500% after posting new videos.

In a study of 89 US TrueView videos, viewers who watched TrueView ads for 30+ seconds were 23x more likely to visit or subscribe to the channel, watch more videos by the brand, or share the video.

YouTube has evolved their feature set so that federal agencies can use the platform for video hosting, embedding and promotion, and still conform to government regulations regarding accessibility, user tracking, and advertising. For some agencies who already have video embed software in place (and URLs from their site ranking) a combined approach that includes YouTube is recommended.

Agencies that want citizen discovery of their videos need to invest in a YouTube optimization and paid promotion strategy because online video consumption is increasing (by 2021 80% of the world’s internet traffic will be video) and YouTube is an essential piece of ensuring your videos are discovered.

Thanks for listening. Come back tomorrow for another SEO tip.

Listen to the previous episode: Is Apple building a search engine?

Get a Free SEO Consultation

For a free 15-minute consultation schedule a time here

Subscribe to get future blog posts and monthly search updates

Listen to my daily SEO tips!

Find out more about Katherine’s contributions to the Digital Marketing industry.

Get a free SEO consultation